AT THE THEATRE - MOLTO RUMORE PER NULLA (MUCH ADO ABOUT NOTHING)

At last I made it. I so wanted to see a Shakespearean play at the Globe and last night it became true. Well , I wasn't at Shakespeare's Globe Theatre in London, actually. There you can see Miranda Raison (Jo in Spooks 4/5/6/7/8, on the left) as Anne Boleyn until 21 August. (HAVE A LOOK HERE)
I was at Shakespeare's Globe in Rome to see MOLTO RUMORE PER NULLA (Much Ado about nothing). 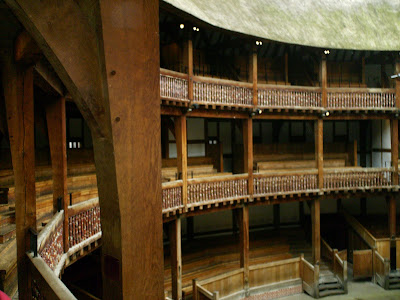 There are two main plots: the Hero-Claudio plot, which belongs to the tragi-comedy type, and the Beatrice-Benedick plot, belonging to the comedy of wit. In this way we obtain different wiews of the same reality, views we might call respectively romantic and realistic.
The over-all theme of the play is “the power of report, of the thing overheard, to alter human destiny”. But most of all what is interesting in this text by Shakespeare is his analysis of the power of words in general. Words can destroy  a person's reputation and life but they can also manipulate their will, they can touch the most hidden corners of  a human soul and change it. For instance, the power of their friends' words , overheard "by chance", leads Benedick and Beatrice  to recognize their  feelings for one another, to believe they are in love with one another. The two have always denied their attraction and their sympathy to the other even to themselves.
Moreover, the power of words, even the words of a drunk man  like Borrachio, will lead to the unveiling of the truth.
The  performance  I saw is based on Loredana Scaramella's ( also the director and a brilliant Beatrice)  and Mauro Santopietro's (a handsome sparkling Benedick)  adaptation of Shakespeare's comedy and the surprise in the show were the songs , dances and music. Great, excellent, exciting choice. Shakespeare's play is set in an imaginary Messina , a city in Sicily. The company decided to sing and dance the "pizzica" ,  ancient popular tradition from the region of Salento (Southern Italy). The result was pure fun.

Excellent performances by the comic minor characters (excellent Balthazar , Carlo Ragone), who involved the audience in hilarious gags. Maybe purists won't like this kind of liberties. I personally think that Shakespeare wouldn't mind what they did of his text. He wrote for a popular mixed audience, his comic characters and their puns were trivial and even obscene. Music and dances popular at the time were not unusual in the staging of his plays.
It has been an unforgettable night with very romantic moments and spontaneous fits of laughter, with the audience clapping at the rythm of the pizzica and the actors joining the "groundlings" in a final dance.
Posted by Maria Grazia at Friday, August 06, 2010
Email ThisBlogThis!Share to TwitterShare to FacebookShare to Pinterest
Labels: At the theatre, Shakespeare

Sounds like a fantastic evening--I think Much Ado really lends itself to local adaptation, especially with regards music and dancing. The original (i.e., Shakespeare's) provides many opportunities for both.

I didn't know that Rome had a Globe Theater--I'll have to put that on the list of things to do when in Rome :)

As it turns out, we are going to see Taming of the Shrew tonight, and I can't wait to see how the director handles the ending in this one.

How nice to see a Shakespeare play, especially in such a theatre!
I have seen Shakespeare performed in the Shakespeare theatre in Stratford, Ontario, Canada. But unfortunately I was only able to catch a glimpse of the Globe theatre in London, England from a tour boat on the Thames. *Sigh!* If only I'd had more time! (and money!)

It must have been a wonderful performance, lucky you! I didn't know about a Globe theatre in Rome either! Ciao. A. PS I loved Jo in Spooks and I was totally upset when they killed her off, so thank you for the info!

This sounds wonderful and I love the picture of the theatre. I recently saw a production of Much Ado in the park in my home town, Ipswich - a young company who took some liberties with the text in the comedy scenes too. I really enjoyed it and agree with you that Shakespeare surely wouldn't mind. By pure chance I also watched the movie starring Kenneth Branagh and Emma Thompson only yesterday - a lovely adaptation. But I'd really love to see this play at the Globe! Great stuff, MG.