AT THE MOVIES - MY BEST FAVOURITE OSCAR NOMINEES 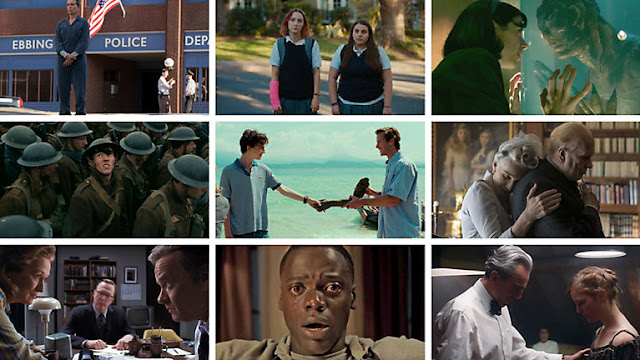 I really hoped to see them in the prestigious lists after the recognition they got at the Golden Globes, but we can never be sure, can't we? I'm not so into awards, but I love good movies and  I'm happy when beautiful, brave, touching stories make it to the spotlight. Call me by your name,  Lady Bird and Dunkirk are the movies I've liked the most. The other nominees as best movies are “Darkest Hour”, “Get Out”, “Phantom Thread”, “The Post”, “The Shape of Water”, “Three Billboards Outside Ebbing, Missouri”.
I saw Christopher Nolan's epic war movie when it came out in September. It was an extraordinary full immersion experience into war I will never forget. A two-hour-long adrenalin rush kept my heart beating fast all through the movie. But it was watching the other two films that I was totally smitten, literally blown away.


When I started watching Call me by your name I was absolutely unaware of what expected me. I hadn't read much about the movie, never heard of the book and I only heard it had been greatly appreciated by critics and viewers when he got a few nominations at the Golden Globes.

I didn't know much about Luca Guadagnino and his previous movies, though he is an Italian director,  nor I knew any of the actors involved. The only familiar name was three time Academy Award Nominee James Ivory, who had adapted the novel by Andre Aciman for the screen and was supposed to direct it at first.

Anyhow, as soon as the movie started I felt like I was back home and  I awkwardly felt as if I was 17 again, like Elio, the protagonist (Thimothée Chalamet). The story, the places, the relationships, the love story, the songs, the cars, the awkward dancing, the air style and the clothes ... everything brought me back to my own adolescence in the 80s.

Chalamet's disarmingly honest interpretation of the protagonist's discovery of sex and of his sensual surrender to love took me off balance first,  then on an emotional ride to the land of nostalgia. I could feel my stomach squeeze and my heart ache,  my body seemed to remember all that so well: the wonderful thrilling experience  of  first love.

Guadagnino crafted a very good low-budget movie, in a style which reminds the French nouvelle vogue,  and the result is a truly beautiful, lyric, sensual tale.


Call Me by Your Name is the story of a romance that blossoms between adolescent Elio and 24- year-old Oliver (Armie Hammer),  a summer guest at Elio's parents’ mansion in Northern Italy. Each is unprepared for the consequences of their attraction.
Love and desire are not the only theme in the movie, because beauty too has a remarkable place. Beauty prevails in the landscape all around, in the refined culture of the main characters, in the pieces of art and classical music, in the tender love which the protagonists try to fight at first and surrender to eventually.

Do you want a taste of that beauty right now? My favourite character, Professor Perlman, Elio's father  utters  these touching, sympathetic words to his son:

"Nature has cunning ways of finding our weakest spot".

"Most of us can’t help but live as though we’ve got two lives to live, one is mockup and the other the finished version, and then there are all those versions in between. But there’s the only one, and before you know it, your heart is worn out, and, as for your body, there comes a point when no one looks at it, much less wants to come near it"

The movie has already got Golden Globe recognition but will love and beauty conquer the Academy too? I do hope so. Meanwhile, it has come out also here in Italy in the last few days and I wish it gets the recognition it deserves. I really hope Italy is ready for such a brave, honest, daring tale of love. You know, we are the country in which a director was beaten and left on the ground for his movie about homosexual couples and adoption.
On the night of May 4th I'll be watching TV and fangirling for Luca Guadagnino's film to win at least one of the 4 Oscars, while praying the results of that day's general elections will not be devastatingly negative. Fingers crossed!

Watch this! Anatomy of a scene

Strangely enough Lady Bird and Call Me By Your Name have many things in common: first of all they are extremely beautiful low bugdet movies, they have been defined "love letters", they have received ravishing positive reviews from critics and viewers, they are both stories of adolescents in search of their identities and experiencing love and sex for the first time, both have great parent figures, both deal with homosexuality, both star Timothee Chalamet (though in completely different roles), both have unforgettable iconic scenes, both have been nominated for Golden Globes and Oscars.

Saoirse Ronan has received her third nomination as best actress for her interpretation of Christine "Lady Bird" McPherson, a unique, pink-haired, 17 years old  girl you can't but love once you meet her. At Rotten Tomatoes they introduce the film saying that in Lady Bird, debuting director Greta Gerwig "reveals herself to be a bold new cinematic voice, excavating both the humor and pathos in the turbulent bond between a mother and her teenage daughter. Christine "Lady Bird" McPherson (Saoirse Ronan) fights against but is exactly like her wildly loving, deeply opinionated and strong-willed mom (Laurie Metcalf), a nurse working tirelessly to keep her family afloat after Lady Bird's father (Tracy Letts) loses his job. Set in Sacramento, California in 2002, amidst a rapidly shifting American economic landscape, Lady Bird is an affecting look at the relationships that shape us, the beliefs that define us, and the unmatched beauty of a place called home". 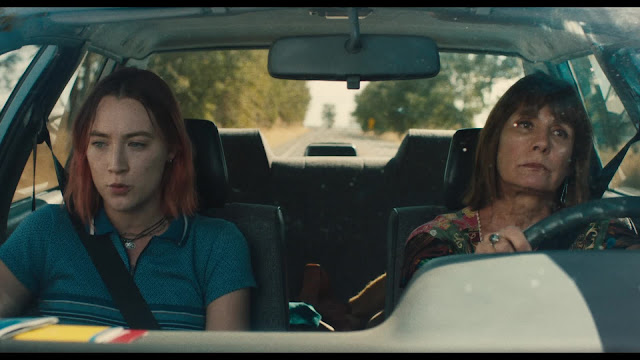 Each little scene is pretty special in this perfectly crafted movie with a terrific cast, but I have a gem I especially liked. Lady Bird throwing herself out of her mother's car in movement you say? No, not that one. A much calmer one.

While waiting for the results, I will be torn between my love for Lady Bird and Call Me By Your Name. I can't choose between the two right now and, maybe, I never will be able to. However,  since the first one won 2 Golden Globes already and the latter none, may I hope something comes to Guadagnino's film at the Oscars Ceremony?