TESS OF THE D'URBERVILLES - A PURE WOMAN, A DEVIL AND AN ANGEL

I've just finished rewatching BBC "Tess of the D'Urbervilles" (2008) to prepare the last  lesson of a series on this novel. I've been choosing the bits to show in my wrap up class to elicit discussion from my students after reading with them some pages and reflecting on the theme that has been our focus lately: the woman question in the Victorian Age.
This is the reason why I played and have been rewatching this DVD tonight.
I started with the intention of looking for the right scenes to show and analyse and finished being absorbed again, touched and deeply emotional,
moved to tears. As well as shocked, stunned, sorrowful. Still foolishly hoping the tragic epilogue must be spared to the readers or watchers this time. You know,  I am not that academic when dealing with literary classics, though I am supposed to be as teacher of English literature. But it happens to me all the time, not only with Tess which is such a beautifully tragic story. I love the tales and the characters I tell about in my lessons. I can't see them just as fictional events and figures to be dissected. Hence, I've got a rather passionate approach to the literary classics I love. Formal text analysis has never been my style, not as a student, even less as a teacher. Thank God, I'm free to choose. 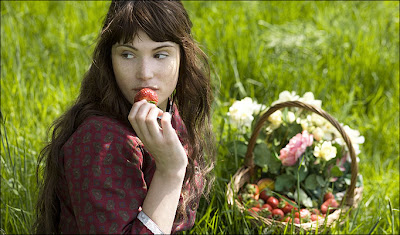 But let's go back to Tess. She is so delicate and so strong at the same time, so determined and so ready to self-sacrifice, naive and generous. Her story shocked me the first time I read it,  so much that I avoided to re-read it for a long time afterwards.
Anyhow, it is a beautiful novel, beautifully written.
I like it more than Far from the Madding Crowd, and I like proposing it to my students,  though I need all my strength to read the pages I choose aloud,  forcing my voice to remain steady.  To convey the emotions without letting them prevail is not always easy. I have no acting talent, though in those moments I wish I had some.

The pages we've read with this group of students are the ones following Tess's confession to Angel Clare on their wedding night. His indecision, his hellish laugh, his passive reaction, his sudden change... I feel as if he were stabbing Tess's at her heart. Figuring out her disappointment and sorrow becomes a poignant experience. Her accepting his inaction and his sarcasm with such helplessness and deep affection, her being ready to forgive him or  just lie and die for him are excruciating. She doesn't shout, she doesn't scream, she lets him go. She is not the woman he married but an impostor to despise, he said . She had forgiven him his past (an affair with an older woman) ,  he cannot accept hers  (being seduced and raped by a cynical rogue,  Alec D'Urbevilles) .
My students, especially the girls, were touched by those words. I felt the tension,  especially in the silence of my pauses.

On one hand, though I tried, I can't like Angel Clare. I have no sympathy for this childish man - living on another planet and loving an improbable ideal of pure woman which couldn't exist in reality. Despite his coming back changed in the end, he is no angel at all. He actually  is one of  those who burnt a real angel's wings, Tess's wings, provoking her downfall.
On the other hand, if one can have controversial feelings for Angel, one can just hate Alec D'Urbervilles, who is a devilish figure.
In chapter XII, he bluntly tells Tess, “I suppose I am a bad fellow—a damn bad fellow. I was born bad, and I have lived bad, and I shall die bad, in all probability.”
Both Alec and Angel have to be blamed for Tess's tragedy. The two young men,  who are self-centred and egoists,  as well as her wretched father. Three men destroyed her life.

Tomorrow we are watching the scenes we read from the book in  this TV adaptation. It is a good one with a great cast directed by David Blair, including Gemma Arterton (Elisabeth in Lost in Austen) Hans Matheson (Canone Inverso, Zivago, The Tudors) and Eddie Redmayne (The Pillars of the Earth, Birdsong, Les Miserables). I hope my students will like it.

I love this version (even more than the Polansky's movie, I have to say)...Gemma Arterton is Tess in body and soul.

I love this book too, although it is so painful to read. I haven't seen the adaptation you feature, though I should.

Tess's story is one of true tragedy--my heart just breaks for that poor girl.

You're right, Jane, it is heartbreaking. Though re-watching the scene of Tess's confession to Angel I got angry, almost furious, last night. I like Eddie Redmayne but I dislike Angel, more than Matheson's Alec. They are both hypocrites.
Maybe will be redeemed by his sense of guilt for what happened to Tess.
Thanks for your comment!

I just love this version too tough it's heartbreaking. I agree the fact that Gemmma is Tess in body and soul (never imagine another actress for that role)