DANTE GABRIEL ROSSETTI, EDWARD BURNE-JONES AND THE MYTH OF ITALY

Another beautiful weekend spent in Rome with friends, another occasion to visit stunning landmarks , art exhibitions and bookshops.  After I watched the TV series Desperate Romantics, I started seeing the Brotherhood of the Pre-Raphaelites as a bunch of fascinating, lively, rebellious young artists and my appreciation for their achievements has increased. This is why I didn't want to miss this DANTE GABRIEL ROSSETTI- EDWARD BURNE-JONES AND THE MYTH OF ITALY IN THE VICTORIAN AGE.  It was an occasion to see Pre-raphaelite paintings here in Italy. A museum dedicated to the art of the Pre-Raphalite Brotherhood is Birmingham Museums & Art Gallery.

On February 24th, The National Gallery of Modern Art in Rome opened this exhibition dedicated  to the relationship between 19th century British Art  and  Italian art and culture, from "the taste of the primitive" to the Sixteenth Century, beginning with the Italy-inspired landscapes of William Turner, through the study of John Ruskin on Italian paintings, monuments and architecture.
Dante Gabriel Rossetti came from the family of an Italian patriot who had fled to England after the failure of the Neapolitan Carbonari insurrection of 1821. Their house in London was a centre of artistic and literary discussion, as well as of liberal politics. 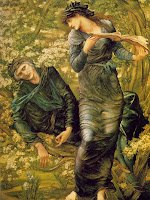 At Oxford Edward Burne-Jones  became a friend of William Morris as a consequence of a mutual interest in poetry. The two, together with a small group of Birmingham men at Pembroke College and elsewhere, speedily formed a very close and intimate society, which they called "The Brotherhood". The members of the Brotherhood read John Ruskin and Tennyson, visited churches, and worshipped the Middle Ages.  Burne-Jones,  discovered Thomas Malory's Le Morte d'Arthur which was to be so influential in his life. At that time neither Burne-Jones nor Morris knew Rossetti personally, but both were much influenced by his works, and met him by recruiting him as a contributor to their Oxford and Cambridge Magazine which Morris founded in 1856 to promote their ideas. 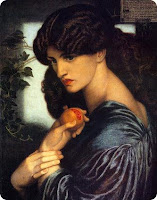 They advocated a return to the purity of late Medieval Italian art, before stylization that set in with Raphael and his followers. Their watchword was "Back to Nature", by which they meant the return to the semplicity tempered by the misticism of the Middle Ages, when spiritual values were held high and mechanization had not yet destroyed individual creativity. Theirs can be defined a spiritual sensuality. 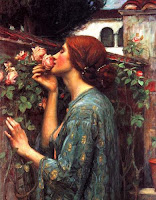 The core of the exhibition in Rome includes the Pre-Raphaelites Dante Gabriel Rossetti, Edward Burne-Jones, William Morris and explores the particular version of classicism operated by artists such as Frederic Leighton and representatives of the Symbolist aesthetic culture or as Albert Moore, George F. Watts and John William Waterhouse.
A particularly significant aspect of the exhibition focuses on the relationship between Italian and English works and the prototypes which have been their iconographic models and suggestions: they are paintings by Giotto, Crivelli, Carpaccio, Botticelli, Sebastiano del Piombo, Palma Vecchio, Bergognone , Luini, Titian, Veronese, Tintoretto - to testify their impact in  English Art. This also permits singular critical readings, subject to continuous developments in the century, as Ruskin's preference for Luini,  compared to Leonardo or Michelangelo. His refusal of  the Renaissance evolution of art was  destined to have a significant influence in the field and in the late Pre-Raphaelite symbolism. 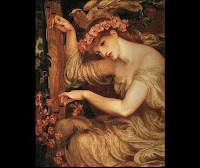 The passion for Italy has a complex critical foundation in the writings of Ruskin, in the original readings of the Renaissance in the work of Swinburne, along with essays by Walter Pater on Giorgione, Botticelli, Michelangelo and Leonardo, texts that have deeply affected the revoulutionary group of writers, artists, critics and patrons who joined the Brotherhood.
Equally important was the strong rise in England, from the beginning of the century, of  public and private collections of Italian art. 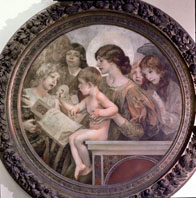 In the exhibition a section is also dedicated to Italian artists - Nino Costa, Giulio Aristide Sartorio, Adolfo De Carolis, Gaetano Previati - that in the last decades of the nineteenth century, right through the discovery of the English "Pre-Raphaelites" , revived the interest in the tradition of  Renaissance.

I love Burne-Jones (and, unrelated, his granddaughter Angela Thirkell). Thanks for this glimpse of the exhibit!

What a fascinating exhibit! I have adored the Pre-Raphaelites since I first became aware of the art of Waterhouse as a teenager. I went on to write about them extensively in college, particularly in the context of the Victorian's bizarre ideals of femininity, and I now have the supreme pleasure of living right behind the Delaware Museum of Art, which houses the biggest collection of Pre-Raphaelite art in North America. Whenever I suffer a dull afternoon, I can stroll around the block and gaze at Rossetti originals to my heart's content. One question your post brings to mind - have ever read William Morris's News from Nowhere, a Utopian novel idealizing agrarian society? I would be very interested in hearing your perspective on it, Maria.

Wow, it really sounds exciting! I'm glad you kept your promise about writing a post on the exhibition ;)
I was just thinking that it seems to be an increasing interest in Italy for the Pre-Raphaelites: last year I visited a lovely exhibition in Ravenna entitled "The Pre-Raphaelites and the Italian Dream". I presume it's not a coincidence, good for us! Ciao,
Claudia

It's been a long time since I read it, and as I recall the book is not exactly mesmerizing, but it is a very interesting expression of the values and ideals you discuss here. So I guess this is a light recommendation - perhaps a someday read.