RA FRIDAY - ON GISBORNE AND SCHOOL

I'll  risk to be repetitive but these are the haunting presences in my life...Gisborne and school. Well, RA and school. I've managed to connect the two of them these days and it has been such a pleasure and ... a success!!! First of all let me thank this man for everything he does... 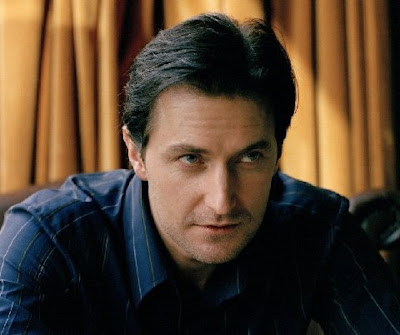 Then I have also to thank this sinister guy ... 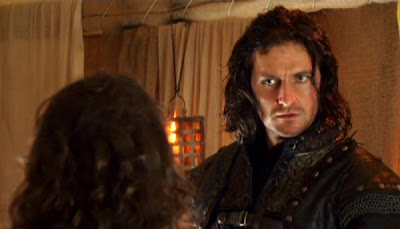 because they have brought me great satisfaction: I experienced the most partecipated and involving lab lessons in  the latest months. My 16-year-old students, after reading about medieval ballads, the cycle of the outlaws, translating and analyzing a whole ballad titled EDWARD ( a family tragedy ballad not  linked to Robin Hood) and part of the ancient "Robin Hood and Guy of Gisborne", were so curious and excited to watch how Robin and Guy were represented on screen in the latest BBC series. They hadn't seen it since in Italy it was aired on  only a pay-TV channel very few people watch. 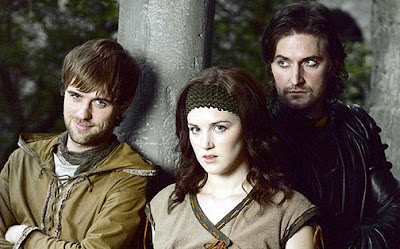 I had chosen and cut three fragments from series 1 and prepared a worksheet with several questions . You can't imagine the silence in that lab. Headphones on and eyes fixed on the computer screens ... their silence was unusual. I think you know teenagers: they start making silly comments on anything. Instead, in that silence , at the end of fragment 1, THE HANGING,  a girl was moved and rather shocked and when I stopped the clip to ask all of them to comment or answer some of my questions,  she went on wondering : "But then they discover they are not really dead, don't they ? Please, tell me that it is not how it seems!" Keith Allen's Sheriff 's wickedness had made another victim!
Then I announced: "now in the second fragment you're going to see how the characters of Gisborne and Robin have become in this latest TV adaptation. Do you remember what Guy of Gisborne was like in the ballad? How is he connoted? " The most hard-working students of the group remembered perfectly his being clad in a horse skin including the tail, his being quite ridiculous in his boasting , ... a man of weight... Robin made a fool of. 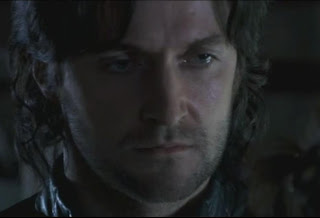 They were so surprised when I played the scene from episode 7, GUY,  MARIAN & THE NECKLACE, that one of them couldn't but shout " ... But he is GORGEOUS!!!" All the others started laughing but just for a while because when Guy started shouting obsessively to a frightened Marian " ... give me the necklace! GIVE ME THE NECKLACE! GIVE ... ME ....THE ...NECKLACE" , they were completely caught and even breathless. It was a pleasure to observe them and their faces, and it was a torture to keep my professional mask. Other questions, other comments and then one of the boys asked: "Professoressa (this is what they call me) why don't we see the whole movie? Why only fragments?" I patiently explained that it was NOT a movie, as I had already explained before starting, but a TV series and watching the whole of it meant 39 episodes hence 39 hours. He answered seriously, "Well, you're right ... too many hours ...but it would be so interesting!" 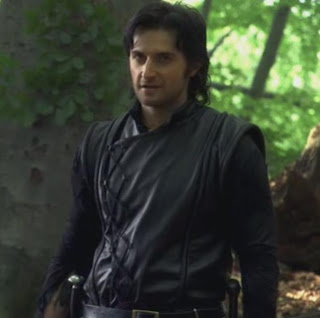 Finally we watched the third and last of the sequences I had prepared, TATTOOS? WHAT TATTOOS?  They enjoyed it greatly. The robbery at Locksley Manor during Guy's party and then the long fight sequence ... they loved it. So promised them to post both the clips and the worksheet with the questions on LEARNONLINE so that they could go on working at home.
I got their written papers with the answers this morning... let's see if their enthusiasm has brought better results. It'd be wonderful.
As you can see, teaching is often exhausting and I very often feel like drowning in a see of paper to be corrected and assessed, but it can also great fun!
Again,  many thanks to Richard and his Gisborne!
My lesson on LEARNONLINE
Posted by Maria Grazia at Friday, February 05, 2010
Email ThisBlogThis!Share to TwitterShare to FacebookShare to Pinterest
Labels: Guy of Gisborne, Richard Armitage, Robin Hood, School

Oh MG, thanks for this post! It made me remember my school days! Uni is just not that fun as school was! We use to call the teachers "Professoooooooora" and when you said your students call you "Professoressa" I missed so much prolonging the o! I'm just laughing a lot here when I think of the girl saying he is gourgeous and everybody laughing! Do they have to speak in English or Italian in the class? Because I started to imagine it in Italian also, something like bello, splendido or magnifico and I find it even more fun! You made me also miss my English classes, not the ones in school, the ones I do in the English school. They are about to start again and I'm kind of sad because in December I'll finish the course as I have only the last two proficency stages to attend to. And that's true, it was very difficult for a teacher to let us watch a whole movie in class, this is so unfair! Sorry for the big comment...

@Luciana
Yes, you're right, the girl shouted " ... Ma questo è bello!" . They are supposed to speak English but, you know, it is not easy to obtain that. Then she had headphones and didn't realize we were listening to her!
Don't apologize for the length of your comments, please. I love to read them! Have a nice weekend. Hugs. MG

That was a pleasant surprise and wonderful idea that you came up with. I wish I would have had teachers like you in school!

Okay, this is just awesome - how I wish I could've studied Guy in school. Lucky students!!!

Sounds like a fascinating lesson, Maria - and great to get a conversation going about the characters like this.

What a great English lesson. I'd be interested to know if your students thought Guy would marry Marian in the end. (Loved the worksheet - I wish my lessons at school were as interesting!)

What a great discussion you must have had! I would love to know what the students answers were! Excellent video clips, by the way.
I'll bet you made some more RA fans from your students!