ANOTHER BUSY DAY OFF 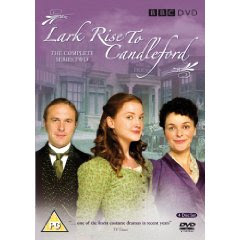 Well, it's not that I love using oxymoron, but it's Wednesday (my sacred day off!) and, instead, I'm just back from school (it's 5.50 p.m!) . I feel sick and tired: I hate working when I'm supposed to be off duty, but I couldn't avoid it. Anybody needs some spare time from time to time. I don't feel like cooking or coping with the housework now. I'd go for a walk but I can't, it's almost dinner time so ... I'll try to relieve my stress writing a little about the things I love.
For example, LARK RISE TO CANDLEFORD. Yesterday I finished watching series 2, twelve delightful episodes ( it took me some weeks, though!). I had watched series 1 on DVD in December ( my post on blogspot is dated April 'cause I imported it from my older blog learnonline) and soon ordered the new one which was broadcast from December to March.

You can find lots of information about the cast, the production and the 12 episodes HERE.

My favourite characters are Dorcas Lane, the post - office lady, (played by Julia Sawalha) and 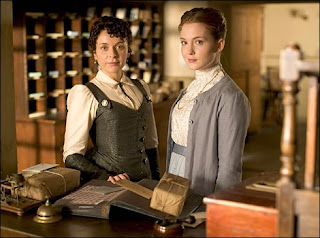 James Dowland (Jason Merrels), the handsome stranger who landed in Candleford this year. It has been described as the “perfect Sunday night winter warmer”, “an antidote to the winter blues”, and the BBC has confirmed a third series of this Sunday night drama which is Bill Gallagher’s adaptation of Flora Thompson’s magical memoir of her Oxfordshire childhood.
The feel-good stories star Julia Sawalha, Olivia Hallinan, Jason Merrells, Brendan Coyle, Olivia Grant, Mark Heap and Ruby Bentall. All the 12 episodes have as their main narrator Laura Timmins (Olivia Hallinan) and see burgeoning romances blossom and falter amongst the two communities, as well as social and financial pressures take their toll in a series that chronicles the day-to-day life of two communities at the end of the 19th century.
It is , in fact, set in the small hamlet of Lark Rise and the wealthier neighbouring market town, Candleford, at the end of the 19th century, the series chronicles the daily lives of farm workers, craftsmen and gentry, observing characters in loving, boisterous and competing communities of families, rivals, friends and neighbours.

My favourite episodes in the second series were the Christmas Special, the 8th and the 9th. Here's a clip from series 2. I adore the two of them !

This kind of costume drama is something I really admire in the BBC production but they are also very good in modern drama. You've certainly noticed my fondness for the spy drama SPOOKS but I've read very good reviews about a new series they're broadcasting just in these days, MOVING ON. They've had the courage to give young unknown writers the possibility of seeing their scripts interpreted by all-star casts. Each episode tells a different story and deals with a different theme.

I must confess I've 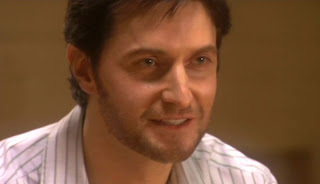 happened to hear about it, following the career of my favourite actor, Richard Armitage, who stars in the third episode DROWNING NOT WAVING as John Mulligan, but it seems a very original contemporary series which I absolutely want to see. It is possible to pre-order the DVD at Amazon.UK . Meanwhile, I've found this beautiful trailer with the 5 episodes and I could see Richard is as lovely as ever. What I love most in him, apart from his skillful acting, is his voice, his blue eyes and his hands.
As Dorcas Lane, the protagonist of LARK RISE TO CANDLEFORD, would say: Richard is ... my one weakness (!!!)
OK. My blue mood has...vanished. Writing this post has worked as an anti-stress therapy.

READY FOR THE CLIP?

I'm passing this one on to a few friends

THANKS, MO! You're welocome!

It's incredible, MG, that you know more about British series than me who lives in the UK! it might be that our TV is usually "taken over" by the boys of the house whose main (and only) interest is football! Anyway, thanks for the tip again. Ciao. A.

Ciao, Antonella!
Unfortunately, it is the same in my family: two sons and a husband always in search for sports news! But I'm completely free to surf the Net with my personal laptop and there I found any information I'm looking for. Then, I have to wait for the arrival of my "beloved" DVDs, but Internet is full of trailers and clips meanwhile...