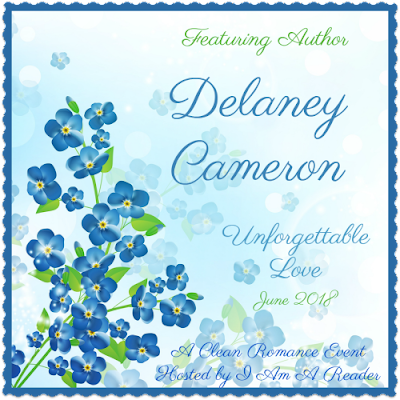 If you've been following this series of posts,  you've realized we have been featuring several fabulous authors who write clean romance and giving away lots of Amazon Gift Cards or Paypal Cash.  Until the end of June we will have more giveaways, free ebooks and great deals on books. Haven't you seen our previous posts? Check them out immediately and don't forget to stay tuned for the next ones!  Here's the book featured today:  MEANT FOR EACH OTHER by DELANEY CAMERON. Grab your free ebook copy, available only on 21st June!   Discover more about the novel, read the excerpt and take your chances to win in the giveaway. Good luck!

Meant for Each Other by Delaney Cameron

Kirsten is thrilled to return to the place where she spent so many summers as a child. Here she can forget the episode that nearly ruined her last year of college. Was it unreasonable to suppose that this far from the scene of her crime she would be safe from meeting the man who knew all about her worst moment? After six months of nonstop traveling, Trey is happy to trade living on the road for the peace and quiet of Tybee Island. In such surroundings, he should be able to work undisturbed. These plans are interrupted by the appearance of a former student. Running into Kirsten is a disturbance of the worst kind: a reminder of an encounter he hasn’t been able to forget. Author’s note: This is a revised and expanded version of a novella published years ago under a different title and pen name. It takes place before the events of Dream of Me.

Read for FREE with KINDLE UNLIMITED

I absolutely loved Kirsten and Trey and their pathway of romance. Their story was very unusual and felt pure and thoughtful,and filled with an underlying depth that could be felt. This is one of those books that I'll read again. Trey and Kirsten are individually so well written. The reader fully feels all of Kirsten’s emotional upheaval, humiliation, confusion, joy, adoration, and sadness right along with her as she tries to work out how to conduct herself and still falls deeper for Trey. We respect Trey for his desire to protect Kirsten’s feelings while maintaining distance, and when he begins to sort out his own mind and feelings, we feel that, too. Delaney Cameron is great with tension and developing both the characters and storyline in a well paced progression. This beautiful story is much, much more than meets the eye. Yes, it is a complicated, modern romance where misunderstanding and pain twist into the relationships and solutions don’t seem possible. Yes, there are 2 men in Kirsten’s life who have different agendas and different styles. Yes, the characters come alive and become your friends as you learn of their inner feelings and deepest desires. Yes, the scenery is deliciously divine—the beach scenes sweep you away to a gorgeous southern island where you want to stay forever and not come back. Yes, the dialogue is real but masterful and often I found myself catching my breath as precious feelings were shared. Yes, it was wonderfully clean. Yes, this book is well-written with a solid storyline but what I discovered within its pages was so much more. This tells the story of true love, pure love, and never-giving-up love, as well as unselfish love and your-needs-are-more-important-than-mine love. The author writes a brilliant journey of true love like I have never read before. Beautiful and soul-searching. Exquisite masterpiece.

I'm a Georgia girl at heart if not by birth. I love to read, watch college football, and spend time with my husband. I'm a hopeless romantic so there will always be a happily ever after in my stories. I also like to write about second chances because love doesn't always work out the first time. My books are sweet romances set in both contemporary and regency settings featuring stories about the journey to love, from that first meeting to the point where two people know their hearts are no longer their own. My characters aren't perfect. They make mistakes and have faults like the rest of us. They learn the sometimes painful truth that the path to love isn't always smooth, but it's a road worth traveling.

This giveaway was organized by Kathy from I Am A Reader and sponsored by the author.