SPOTLIGHT ON ... THE ECHOES OF LOVE BY HANNAH FIELDING - WIN A PAPERBACK COPY! 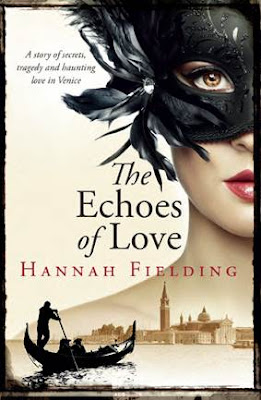 The Echoes of Love is a touching love story that unfolds at the turn of the new millennium, set in the romantic and mysterious city of Venice and the beautiful landscape of Tuscany. It is a tale of a lost love and betrayal, unbleached passion and learning to love again – and a terrible truth that will change the lives of two strangers forever.

Venetia Aston-Montagu has escaped to Italy’s most captivating city to work in her godmother’s architectural practice, putting a lost love behind her. For the past ten years she has built a fortress around her heart, only to find the walls tumbling down one night of the carnival when she is rescued from masked assailants by an enigmatic stranger, Paolo Barone.


Drawn to the powerfully seductive Paolo, despite warnings of his Don Juan reputation and rumours that he keeps a mistress, Venetia can’t help being caught up in the smouldering passion that ignites between them.


When she finds herself assigned to a project at his magnificent home deep in the Tuscan countryside, Venetia must not only contend with a beautiful young rival, but also come face to face with the dark shadows of Paolo’s past that threaten to come between them.


Can Venetia trust that love will triumph, even over her own demons? Or will Paolo’s carefully guarded, devastating secret tear them apart forever? 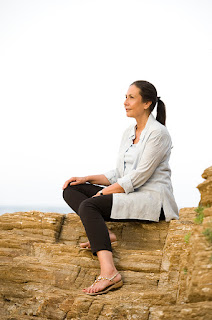 Hannah Fielding is an incurable romantic. The seeds for her writing career were sown in early childhood, spent in Egypt, when she came to an agreement with her governess Zula: for each fairy story Zula told, Hannah would invent and relate one of her own. Years later – following a degree in French literature, several years of travelling in Europe, falling in love with an Englishman, the arrival of two beautiful children and a career in property development – Hannah decided after so many years of yearning to write that the time was now. Today, she lives the dream: writing full time at her homes in Kent, England, and the South of France, where she dreams up romances overlooking breath-taking views of the Mediterranean.
To date, Hannah has published four novels: Burning Embers, ‘romance like Hollywood used to make’, set in Kenya; the award-winning Echoes of Love, ‘an epic love story that is beautifully told’ set in Italy; and Indiscretion and Masquerade (from the Andalusian Nights Trilogy), her fieriest novels yet. She is currently working on her forthcoming book, Legacy, the final title in the trilogy, which is due to be published in spring 2016.

It was nearly seven-thirty and the shops were beginning to shut down for the night. The wind that had blown all day had dropped, and a slight haze veiled the trees, as if gauze had been hung in front of everything that was more than a few feet away. The damp air was soaked with silence.
Venetia tightened the belt of her coat around her slim waist and lifted the fur collar snugly about her neck. The sound of her footsteps echoed off the pavement as she hurried towards the Rialto Bridge from Piazza San Marco, a solitary figure in an almost deserted street. She was on her way to catch the vaporetto water bus, which would drop her off at Palazzo Mendicoli where she had an apartment. A few huddled pedestrians could be seen on the opposite pavement, and there was not much traffic on the great inky stretch of water of the Grand Canal.
Suddenly Venetia saw two figures spring out in front of her from the surrounding darkness. They were enveloped in carnevale cloaks, with no visible faces, only a spooky blackness where they should have been. A hand materialised from under the all-encompassing wrap of one of the sinister creatures and grabbed at her bag. Chilled to the bone, Venetia tried to scream but the sound froze in her throat. Struggling, she hung onto the leather pouch which was looped over her shoulder and across her front as she tried to lift her knee to kick him in the groin, but her aggressors were prepared. An arm was thrown around her throat from the back and the second figure produced a knife.
Just as he was going to slash at the strap of her bag, an imposing silhouette emerged from nowhere and with startling speed its owner swung at Venetia’s attacker with his fist, knocking him off balance. With a grunt of pain the man fell backwards, tripping over his accomplice who gave a curse, and they both tumbled to the ground. Then, picking themselves up in a flash, they took to their heels and fled into the hazy gloom.
‘Va tutto bene, are you alright?’ The stranger’s light baritone voice broke through Venetia’s disoriented awareness, and he looked down anxiously into her large amber eyes.
‘Yes, yes, I think so,’ she panted, her hands going to her throat.
‘Are you hurt at all?’
‘No, no just a little shaken, thank you.’
‘You’re shivering. You’ve had a bad shock and you need a warm drink. Come. There’s a caffeteria that serves the best hot chocolate in Venice, just a few steps from here. It’ll do you good.’ Without waiting for a response, he took Venetia’s arm and led the way down the narrow street.
Venetia’s knees felt like jelly and her teeth were chattering. ‘Thanks,’ she murmured, still trying to catch her breath, her heart pounding, and let herself be guided by her tall, broad-shouldered rescuer, who seemed to have taken the situation into his hands.
Thus does Fate cast her thunderbolts into our lives, letting them fall with a feather-like touch, dulling our senses to the storm they would cause should we realise their devastating powers.