WAITING FOR THE OSCAR NIGHT - THE IMITATION GAME (2014)


Alan Turing was a prodigy endowed with incredible stubborness and will power. He succeeded in an apparently impossible enterprise saving thousands of lives during WWII: he invented a machine to decrytp  Enigma, the Germans' secret code, thus boycotting many of their deadly attacks on Britain. He saved all those lives  thanks to his ingenious intuition, algorithms and computing being almost a game to him . He contributed to change the outcomes of a horrifying war,  designing his machine which could compute thousands of figures at a speed a human mind could have never achieved, neither the most brilliant. He is now considered one of the fathers of computer science and a war hero.

More than the mathematician  and the war hero, The Imitation Game, conveys the portrayal of  the man, who actually is  a tragic unconventional hero, worth being the protagonist of a great tale. The movie, starring Benedict Cumberbatch as Turing -  with  Keira Knightley, Mark Strong, Matthew Goode and Allen Leech also in the cast .  is a touching cinematic biopic.  The lonely, complicated soul Alan Turing was, with all his flaws,  his obstinacy, inflexibility,  egocentricity   and matter-of-factness are convincingly captured and brought  to life in a blessed performance by Benedict Cumberbatch, who succeeds in rendering both the man's awkwardness and his ingenuity 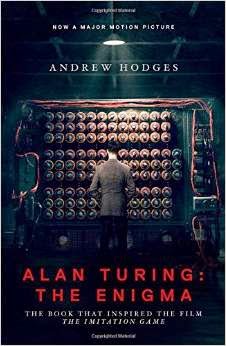 The film is based on Andrew Hodges’ book, Alan Turing: The Enigma and the narration interwines three different time threads.  The main one is the 40s, when Turing worked on decrypting the German code and  became a  national hero (Winston Churchill recognized Turing’s was the single biggest contribution to their victory against the Nazis), and became friends with his team members, which was something apparently almost as impossible as their team's mission. In those years he built his friendship with Joan Clarke (Keira Knightley), who complemented his mind and also permitted him to obtain social acceptance.

The earlier timeline depicts Turing’s first love in 1930 — Christopher, a classmate who accepted his eccentricities,  introduced him to cryptography and helped him  face the brutality of life: “Do you know why people like violence?  It is because it feels good.  Humans find violence deeply satisfying.  But remove the satisfaction and the act becomes hollow.”

The third section is set instead in the 50s and portrays the investigation into Turing’s personal life that would lead to his prosecution for homosexuality and to his tragic final decision to kill himself as a consequence.
I don't know if it can be solace at all what we usually sadly say in these cases: they destroyed the man,  not his legacy. Sad indeed.
The Imitation Game had its due recognition when it was presented at Toronto International Film Festival back in September 2014, winning the People's Choice Prize.  Now the Academy Awards night is very close and The Imitation Game has been nominated in 8 different categories, among which Best Motion Picture, Best Performance by a Leading Actor and  by Supporting Actress (Keira Knightley). Let's see if something more will come their way this time. So far The Theory of Everything has got the better both at BAFTAs and Golden Globe. 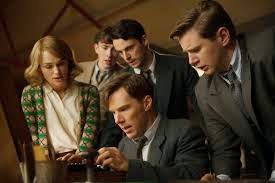 The Imitation Game at imdb

Making The Imitation Game - Behind the scenes

I thought this was a great movie--Academy Award worthy! I thought Cumberbatch was convincing as Turing and my heart just broke for him. Knightley was really good too.