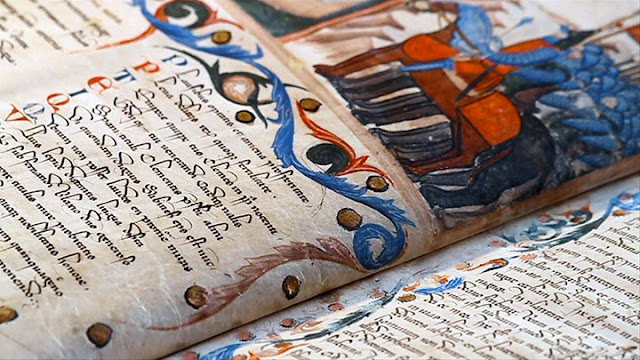 My latest trip to Rome was a couple of days ago to meet friends, to have a delicious English-style tea, to plan our summer holidays together (top secret!) and to visit this intriguing exhibition. History and secret documents, not Art this time: Lux in Arcana.

The exhibition which is conceived for the 4th Centenary of the foundation of the Vatican Secret Archives aims at explaining and describing what the Pope’s archives are and how they work and, at the same time, at making the invisible visible, thus allowing access to some of the marvels enshrined in the Vatican Secret Archives’ 85 linear kilometers of shelving; records of an extraordinary historical value, covering a time-span that stretches from the 8th to the 20th century.

The name, Lux in arcana, conveys the exhibition’s main objective: the light piercing through the Archive’s innermost depths enlightens a reality which precludes a superficial knowledge and is only enjoyable by means of direct and concrete contact with the sources from the Archive, that opens the doors to the discovery of often unpublished history recounted in documents. The exhibition is enriched by multimedia installations, guided by an intriguing but rigorous historical narration, to allow the visitor to experience some famous events from the past and to “re-live” the documents, that will come to life with tales of the context and the people involved.

The 100 documents, chosen among manuscript codices, parchments, strings and registers, will remain at the Capitoline Museums for nearly seven months, till September 2012. An extremely prestigious location, chosen to host this memorable event since it underlines the profound bond existing between the city of Rome and the Papacy since medieval times; the origins of both institutions involved in the event trace their roots back to Sixtus IV’s artistic sensibility; however, at the same time, the history enshrined in the Vatican Secret Archives is intertwined with the history of Italy, Europe and the World as a whole.

Coming face to face with original documents that touched on the life and times of such as Henry VIII, Erasmus of Rotterdam, Michelangelo, Mary Queen of Scots, Lucrezia Borgia, Boccaccio, Voltaire, Mozart, Galileo Galilei – and many, many others – was like going on a journey through the last 1,000 years of European history.


Visit the official site to discover the documents, the curiosities, the characters in this amazing exhibition. If you plan to visit Rome, this is one not to be missed!

What an interesting exhibit, Maria Grazia, thank you for sharing it! :) Hope you're doing well.

I would so love to visit Rome, one day. Thanks for sharing your wonderful trip! Lovely

@Katherine Cox
I'm fine but a bit over-busy. Very little time to surf the Net and do proper socialnetworking. Hope you are fine and doing well. Thanks for stopping by and commenting. Have a nice Sunday!
@Krista
You're right, my trips to Rome are always very special events thanks to my friends:-)
I hope you can come and visit one day. Spring is the best time, I think. Today, for example, it's warm, sunny with a wonderful intense-blue sky. I'm not in Rome but my little town in the mountains can be very beautiful, as well. Happy Sunday to you!