Watching period drama or costume movies is one of my favourite pastimes and being on holiday helps a lot! I've recenlty watched several films, these are just three of them, all of them set  around the years of WWII: BBC 2 The Night Watch (2011) , Miss Pettigrew Lives for a Day (2008) and Within the Wirlwind (2009).

The Night Watch  - I was in England when it was on BBC2 on 12 July and could see it while in Nottingham. My attention was caught by the first scenes showing Anna Maxwell Martin (Bleak House, North and South, South Riding) in men's clothes wandering about the crowded streets of London as haunted. So I decided to go on watching though I didn't know anything about it.

"If you go to the cinema midway through a film, you watch the second half first, don't you?" Kay - the character Anna Maxwell Martin plays - says at the beginning. The Night Watch then also unfolds from back to front, beginning in 1947, then jumping back to 1944, then again to 1941( it is just the same device used by Sarah Waters in the novel (2006) this TV movie is an adaptation of ).

The story follows four main plotlines linked to four of the main characters, three women Kay, Helen, Viv,  and a man, Duncan. Lesbian and gay love, betrayals and firm relationships, life in prison and under the bomb attacks, in the middle of the horrors of WWII  broken lives and thwarted destinies (plot).
Problem was the compression. Not because you couldn't follow the development of the story-line,  but because it lacked in characterization and psychological depth.

A story with at least four concurrent plotlines and a complicated structure was cut into less than 90 minutes, which is tight even for a cinematic film these days. Why not a mini - series with at least 3 episodes, following the layout of  original novel seen also the quality of the cast? (among others Anna Maxwell Martin, J.J. Feild, Claire Foy, Jodie Witthaker). The Night Watch was ok, beautifully filmed and with great actors indeed,  but it didn't convince me. It was supposed to move and to touch but I definitely wasn't.  I'm sure  SarahWaters's novel must be much better. Have you read it? And have you seen this adaptation?

This is a lovely light-hearted comedy based on a popular old book , a bestseller when it came out in  1938. Stellar cast and lots of fun are the main features of this pleasant film.
It tells of one day in the life of Guinevere Pettigrew (Frances McDormand) who is a governess who finds herself jobless and homeless on the streets of London on the brink of WWII. When she hears that  Delysia Lafosse (Amy Adams) is looking for a secretary,  she pretends to be one and gets the job. Miss Pettigrew knows nothing of high societya nd with her unkempt hair and plain clothes, Miss Pettigrew look totally out of place.

However, Miss Pettigrew's is greatly talented at avoiding-strategies, problem-solving and advice-giving and she succeeds in getting Delysia out of troubles. Delysia's glamorous lifestyle changes Miss Pettigrew's dull life into a whirlwind of events. The two become unlikely friends since their life-styles couldn't be more different.Miss Pettigrew has always been a hard-working, modest woman, expert only in the "lack of love", as she confesses to Delysia.

Delysia, instead,  lives in a penthouse belonging to club-owner Nick (Mark Strong) and beds the young Phil (Tom Payne) in the hopes of becoming the protagonist of the play he's producing, but her heart  belongs to Michael (Lee Pace), the passionate piano player who loves her just the way she is.
A fascinating rich man comes along in Miss Pettigrew's new life and seems interested in her ...

In the cast, besides the mentioned actors and actresses,  also Ciaràn Hinds and Sherley Henderson.
This film is pretty good, fast paced and well acted , with good musical numbers. It reminded me of Feydeau's works. Maybe they can't change much in your  life - as it happens instead to the protagonists of this film in only one day - but certainly they can contribute to improve your blue mood. 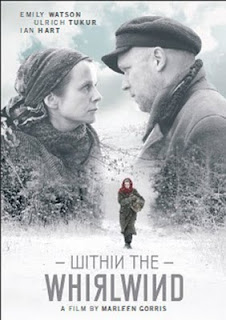 Within the Wirlwind (2009) - Directed by Marleen Gorris and  written by Nancy Larson, this film is based on the autobiographical writings by Eugenia Ginzburg    published in English in 1967 as Journey into the Whirlwind.
The history professor, Elvov—who like Eugenia (Emily Watson) writes for a regional newspaper—is arrested allegedly for failing to interpret Trotsky’s theory of permanent revolution along Stalinist lines in an historical article.
Ginzburg is accused of lacking “political vigilance” in relation to Elvov. When she protests—in contrast to her colleagues—against the absurd accusations, she herself is accused of being a member of a Trotskyist terrorist group, planning to reintroduce capitalism into the USSR. Expelled from the party, she is sentenced by a court to 10 years hard labour. Her husband, a senior party official, is also arrested.
The second, longer part of the film depicts the appalling life in a Siberian prison camp: felling trees in temperatures of -40C degrees and lower, the brutalisation of people, the ubiquity of illness and death, prisoners’ uncertainty about the fate of their children. Ginzburg collapses when she learns that one of her sons has starved to death in Leningrad during the siege of the German army. She is saved by a  German doctor, Anton (Ulrich Tukur), who like her has managed to retain his humanity under the atrocious conditions, and shares her passion for literature.

This is a film full of literature, literary quotations run through all over it, underlying the fact that beauty and art can help to survive in the worst possible conditions of inhumanity. Literature is what prevents Ginzburg from becoming mad while persecuted and isolated. Literature, solidarity and love.
It is characterized  by emotionally disturbing scenes, especially in the first part, when the brutal strategy of suppression starts. Remarkable performance of Ian Hart as Ginzburg's tormentor. Anyway, the director's aim in this movie seems convey the personal story of a strong woman. The reality of that period, the social atmosphere, the passions of the time are apparently of little interest to the filmmaker. Consequently, some of characters are stereotypical, one-dimensional, thus very little realistic.
Posted by Maria Grazia at Wednesday, August 03, 2011
Email ThisBlogThis!Share to TwitterShare to FacebookShare to Pinterest
Labels: BBC Drama, Costume movies, From Books to Movies, WWII Movies

Dear Maria Grazia, you know I love period drama, too and you're an endless source of information for me. I will put these movies in my wish list!!! So long a list, but wonderful to have plans. I'm still busy at work, but I love spending my weekends reading, walking by and watching good movies and TV series. I've just received a signed copy of one of my favourite books and I can't wait until I can sit down and start reading it. Now I'm also planning to watch some new period drama...relaxing idea. Got to go back to work now.

@maribea
Lots of plans for a short weekend! I hope you can relax a bit after a long hard-working week. Have a nice day.