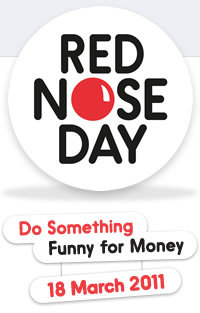 This weekend in the UK has been very special, dedicated to charity but with a light touch and lots of fun for everybody. Comic Relief on TV with their  Red Nose Days all over the UK have been a solid institution for 26 years now. Everything started  in 1985 from  a refugee camp in Sawafa, Sudan, and since then hundreds of millions of pounds have been raised, primarily through Red Nose Days, for some of the poorest and most vulnerable people across the UK and Africa. Two thirds of the money from Red Nose  to charity work in Africa and a third to UK voluntary organizations.
Red Nose Day is a UK-wide fundraising event organised by Comic Relief  which culminates in a night of extraordinary comedy and moving documentary films. On Red Nose Day everyone in England, Scotland, Wales and Northern Ireland is encouraged to cast inhibitions aside, put on a red nose and do something a little bit silly to raise money, celebrities included.
If you loved Downton Abbey, just have a look at this parody which was aired just yesterday.

Comic Relief was set up by comedians and uses comedy and laughter to get serious messages across, as well as making sure that everyone can have some fun at the same time. Over the years, more than 2,000 celebrities have given their time and talent to Comic Relief, from Johnny Depp, Robbie Williams, Whoopi Goldberg, Woody Allen, Sting to, last but definitely first in our hearts,  Richard Armitage!
Here we are, then. Let's have a look at RA's contribution to Comic Relief ...


Not totally related, but always linked to RA's performances to raise money for charity, this is  a Robin Hood Special for Children in Need. Amazing Gisborne!

HAVE A NICE WEEKEND, YOU ALL!!!
Posted by Maria Grazia at Saturday, March 19, 2011
Email ThisBlogThis!Share to TwitterShare to FacebookShare to Pinterest
Labels: Events, Richard Armitage

RA is hilarious with Pudsey! How did he keep a straight face :)

@Musa
Because he is a great actor? :D

I guess he and Lucy shoot several takes, though ;)
Nave a nice Sunday,
xx K/V

I love Red Nose Day, people do the funniest things all over the country to help raise as much as possible for charity. In my husband school the teachers got "bombed" with baked beans! Hadn't seen the RA clips before. So great! Do you know that I've just bought The Children's Book this afternoon? Found it in an Oxfam shop for £1.99 in perfetc condition!!!! Have a nice Sunday. Ciao. A.

@lunarossa
Glad you saw these clips with RA thanks of me! I'm actually reading Il Libro dei Bambini, the Italian translation. Borrowed from K/V. She's always a precious source of good suggestions. Ssssh! Don't tell her, she could get big-headed!
Ciao! Buona domenica!
MG

Ohhh yes, thanks for the reminder about the VoD special! :)

@Traxy
Welcome. Have a good Sunday!

That Downton Abbey spoof is hilarious!! As for the VoD spoof -- every time I watch it I can't believe Geraldine is getting so excited about Sting! Other than his singing talent he's got nothing on our RA (or Harry either)! If we were allowed to hear more of RA singing maybe he wouldn't even have that!
I love the Children in Need Charity spots. Brilliant! Love his last line so much!