What if Sherlock Holmes lived in present-day London and had the chance to support his brilliant, sharp deductive mind with technology and the Net? You can find the answer to that watching the 3 episodes of the new Sherlock BBC ONE broadcast not long ago, Masterpiece PBS  has just shown and which is already available on DVD. 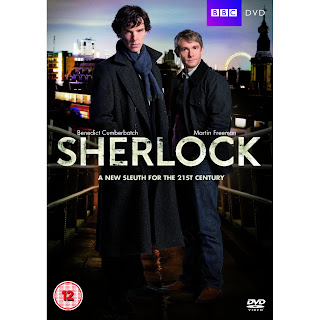 Sherlock Holmes is played by Benedict Cumberbatch, John Watson by Martin Freeman ( who is going to be Bilbo Baggins in The Hobbit movies and was in Love Actually) , Mrs Hudson by Una Stubbs (Eastenders), Inspector Lestrade by Rupert Graves (Maurice, The Tenant of Wildfell Hall) , Molly Hooper by Louise Brealey (Casualty, Bleak House), Sargeant Sally Donovan by Vinette Robinson (Between the Sheets) and Sarah, Watson's love interest,  by  Zoe Telford (The Golden Hour). Lots of familiar faces, aren't there?
Episode 1 - A Study in pink
Episode 2 -The Blind Banker
Episode 3 - The Great Game

The world's favourite detective has emerged from the fog. With sparkling scripts and unforgettable performances from the two leads, this is Sherlock for a new generation.
Sherlock has a unique analytical mind, earning his living and staving off boredom by solving crimes. The weirder and more baffling the better ... 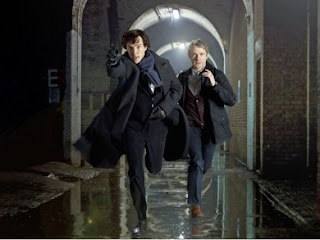 Across three thrilling, scary, action-packed and hugely entertaining episodes, Sherlock and John navigate a maze of cryptic clues and lethal killers to get at the truth.
Sherlock Holmes was always a modern man – it's the world that got old.
Now he's back as he should be – edgy, contemporary, difficult – and dangerous!
John Watson – Doctor, soldier, war hero. Fresh from military service in Afghanistan, a chance encounter brings him into the world of Sherlock Holmes – loner, detective, genius. The two men couldn't be more different, but Sherlock's inspired leaps of intellect coupled with John's pragmatism soon forge an unbreakable alliance. 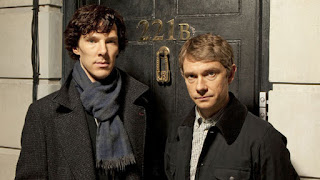 Mind you ... it is clear there will be a series 2! The third episode ends in a dramatic cliffhanger ...they can't leave us like that! We want to know what happens between Moriarty and Sherlock! That gun will stay aimed and still until Sherlock 0201!
Have you seen this series? Did you like it? I think this is actually a brilliant intelligent TV production. Waiting for more!

BTW, have you heard? 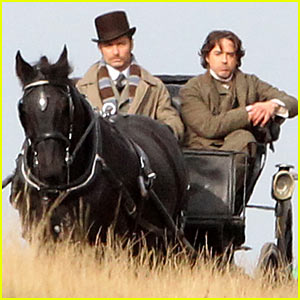 Robert and Jude Return to the Set as Holmes and Watson !!!
(most pictures and news were taken from BBC Official site  and BBC Press Pack for Sherlock)
Posted by Maria Grazia at Monday, November 08, 2010
Email ThisBlogThis!Share to TwitterShare to FacebookShare to Pinterest
Labels: BBC Drama, My DVD collection

I think the new Sherlock is an excellent, intelligent adaptation and I've enjoyed Cumberbatch in quite a few other productions. He's an excellent choice. Really, the cast is wonderful, isn't it?

We saw it when it was aired on BBC and thought it was a brilliant show. Loved it! Happy to hear there will be a series two. :)

Oh, this show is just brilliant. Working on my blog post review of "The Great Game" right now. I can't wait till series 2!

I re-watch it at least once a week, it's a brilliant adaptation and the acting is superb.. I hope MF's gig with Peter Jackson doesn't cross with series 2. I love his John (aaaaaaargh-not-another-one!!!!) Watson.

Didn't see it but I'd like to. I'm a very big fan of Sherlock Holmes and I like him a bit trasgressive fro example as played both by Rupert Everett (in a one off production) and Downey Jr. So this might be my cup of tea.

I have wanted to watch this, but I have to wait for the dvd. I have always been a Sherlock Holmes fan.