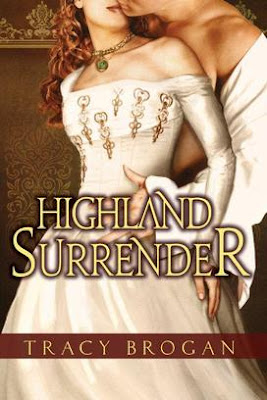 Defiant Highland beauty Fiona Sinclair is shocked by her brothers’ treachery. To seal a fragile truce, they have traded her hand in marriage to their sworn enemy, a man she has never met, a man she was raised to despise. With no choice but to wed, Fiona makes her own private vow: though she may surrender her freedom, she will never surrender her heart.

Commanded by his king, Myles Campbell is no more willing than his reluctant bride. Still, she is a rare beauty, passionate enough to warm even the coldest marriage bed. Buy Myles quickly realizes Fiona Sinclair is no common wench. She has a warrior’s spirit and a fierce pride that only a fool would try to tame. And Myles Campbell is no fool. Their marriage was meant to unite warring clans. They never imagined it would ignite a once-in-a-lifetime love…

People often ask why I write in two different genres – contemporary and historical. One reason may be that I have dual personalities. My family is quick to point out I have both Princess and Ogre-like tendencies – but just because Mommy has mood swings, that doesn’t quite answer the question. Truthfully, I never expected to write a contemporary, but while I toiled away on multiple historical novels, a funny, little, modern-day romance popped into my head. So I wrote it, and voila! Dual genres.

But my true love remains solidly with historical romance. HIGHLAND SURRENDER is a culmination of rough outlines and rougher drafts, purple prose and loose threads that I carried in my mind for several years before truly committing it to paper and polishing it smooth. I won’t say it is the book of my heart simply because I find whatever book I’m working on becomes that, but I will say it is the book I was referring to all those times in my past when I said, “I’m going to write a book someday.”
I love historical novels for their ability to take me back in time. Since I don’t typically enjoy science fiction or futuristic storylines, visiting the past is the best way for me to experience a different world than the one I inhabit. While I’m certain those golden days gone by were full of daily inconveniences, uncomfortable clothing, strict social constraints, and a distinct lack of decent bathroom facilities, I choose to view them through a kindly haze of nostalgia. The rustling silk of ball gowns as debutantes twirl around the dance floor in the arms of cravat-wearing gentleman, furtive glances over an ivory fan betraying secret longings of unrequited love, the drama of history unfolding when it was still a mysterious cloud of uncertainty. 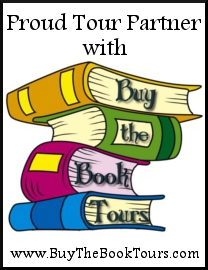 There is also my appreciation, and I don’t think I’m alone in this, for the alpha male! There is an old expression about it being “a time when men were men, and women were glad.” In my fiction, I like men to be MEN. Stubborn and certain and really, really strong. When writing contemporary fiction, especially romantic comedy like my other books, you can’t have a man be too chest-thumpy or he comes across like an un-evolved knuckle-dragger. But back in the day, that was just how men behaved. They were warriors defending their hearth and home. And since we’re talking fiction, we can create brawny, intelligent men with big muscles AND big hearts. And big… well, you get the idea.
For me, there is something inherently romantic about the past. The quests, the hardships, the fight our heroines must go through to follow their hearts and minds to make a love-match. Like most readers of historical romance, I love to be immersed in the grandeur and the mystique. As a writer of it, I try to provide a portal to another wonderful era.

Fiona Sinclair could not reconcile the irony of nature’s twisted humor. For today of all wretched days the sky should be burdened with clouds as dark and dismal as her mood. But the morning dawned soft and fair, mild as a Highland calf, and she knew that God himself mocked her. At any moment, Myles Campbell and his father, the Earl of Argyll, would pass through the gates of Sinclair Hall, unwelcome, yet unhindered by her clan. Soon after that, she must stand upon the chapel steps and marry a man she had never met, and yet had hated for all of her life.
Through her narrow bedchamber window, sounds from the bailey filtered up. The smithy’s hammer tapped a mellow cadence as if this day were just like any other. Perhaps he shaped a horseshoe or a pointed pike. She smiled at the latter and imaged the heaviness of that same pike in her hand. Oh, that she had the courage to plunge it deep into the earl’s heart, if indeed he had one.
She rose from the threadbare cushion on the bench and moved without purpose toward the stone fireplace. A low fire burned, warding off the spring morning’s chill. From habit, Fiona slipped her hand into the leather pouch around her waist. She squeezed tight the silver brooch inside, its design and inscription etched as clearly in her memory as on the pin itself. A boar’s head, symbol of Clan Campbell, with words chosen by the king himself.
To Cedric Campbell, a true friend is worth a king’s ransom. James V.
The brooch had been a gift to the Campbell chief, the man about to become her father-in-law. But he had left it behind nearly seven years earlier, pierced into the flesh of Fiona’s mother so that all the world might know he had dishonored her. The priest found Aislinn Sinclair’s lifeless body in a secluded glen outside the village, stripped bare and broken, marked by Cedric’s lust and spite. Thus a feud, long simmering at the edges, boiled over.
But today the king thought to put an end to it with this farce of a marriage between a Sinclair lass and a Campbell son. It would not work.
Fiona paced to the window, restless and melancholy. She leaned out to breathe fresh spring air, hoping it might lighten her spirits. The too-sweet scent of hyacinth clung to the breeze, along with the ever-present brine of Moray Firth. Along the west curtain wall, more hammering sounded as masons worked to bolster the steps leading to the main keep. As if precarious stairs alone might halt the Campbell men from gaining entrance. But nothing would. Her fate as a Campbell bride had been declared the very day she drew in her first breath, and sealed when her father blew out his last. 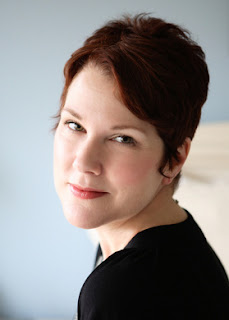 Tracy lives in Michigan with her bemused husband, her perpetually exasperated children, and two dogs, who would probably behave better if they could understand sarcasm. 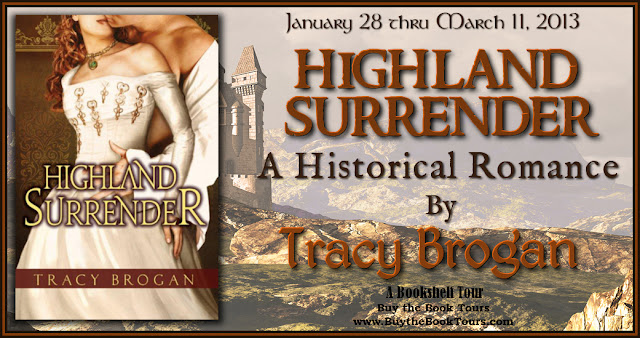